By Simon Kertonegoro
14/10/2021
Efinity Deserves to Win the First Polkadot Parachain Slot on Auction, Here’s Why

Polkadot founders Gavin Wood and Robert Habermeier have announced that the first parachain slot auctions could go live on the November 11th, 2021.

Now, the best decision Polkadot and its community could possibly make, is to give Efinity a parachain slot as soon as humanly possible.

I don’t know if Efinity will be part of the first batch of auctions. I’m just saying that if it is, it deserves all of your votes.

In fact, I’m willing to bet that no other parachain will bring as much volume and value to the Polkadot network.

Let me explain why.

When Efinity launches, all kinds of tokens will gravitate from other blockchains, onto Efinity, and onto the Polkadot network.

Efinity has been ingeniously designed to have its own gravitational pull that draws cryptocurrencies and NFTs into its orbit by offering first-in-class features that no other developer could even conceive, let alone achieve.

Mark my words, no matter what chain you currently use, once Efinity goes live, you're going to consider moving all of your cryptocurrencies and NFTs onto it – and so is everyone else who sees what it can do.

Thanks to its innovative paratoken standard, Efinity is the first blockchain that will support all cryptocurrencies and NFTs out of the box, no new smart contracts need to be deployed when adding new tokens to Efinity.

That means you will be able to port ANY token from ANY chain DIRECTLY onto Efinity at the click of a button.

You won’t need to convince any project to adopt Efinity, you can do it for them!

Efinity's layer 1 blockchain is in testing and able to mint 120 million NFTs per block with 6 second block times. That’s 20 million mints per second.

Ethereum only runs at 70 transactions per second with 30 second block times.

There is no blockchain in the world with comparable NFT scalability on its roadmap or horizon, while Efinity is already achieving these benchmarks.

Buyers will literally be paid to bid on your NFTs, those bids will give you a real-time valuation of your entire portfolio.

You can accept the bids at any time and sell your NFTs in an instant.

This will provide unprecedented liquidity for new markets that adopting NFTs to back their products with, including:

Many world-class blockchain games and apps have already committed to adopting Efinity, including:

At MyMetaverse, we have a deep understanding of how Efinity works and what we can do with it. So, we’re already planning for it.

Here's the kind of user-experience we think we can achieve by integrating Efinity into our platform: 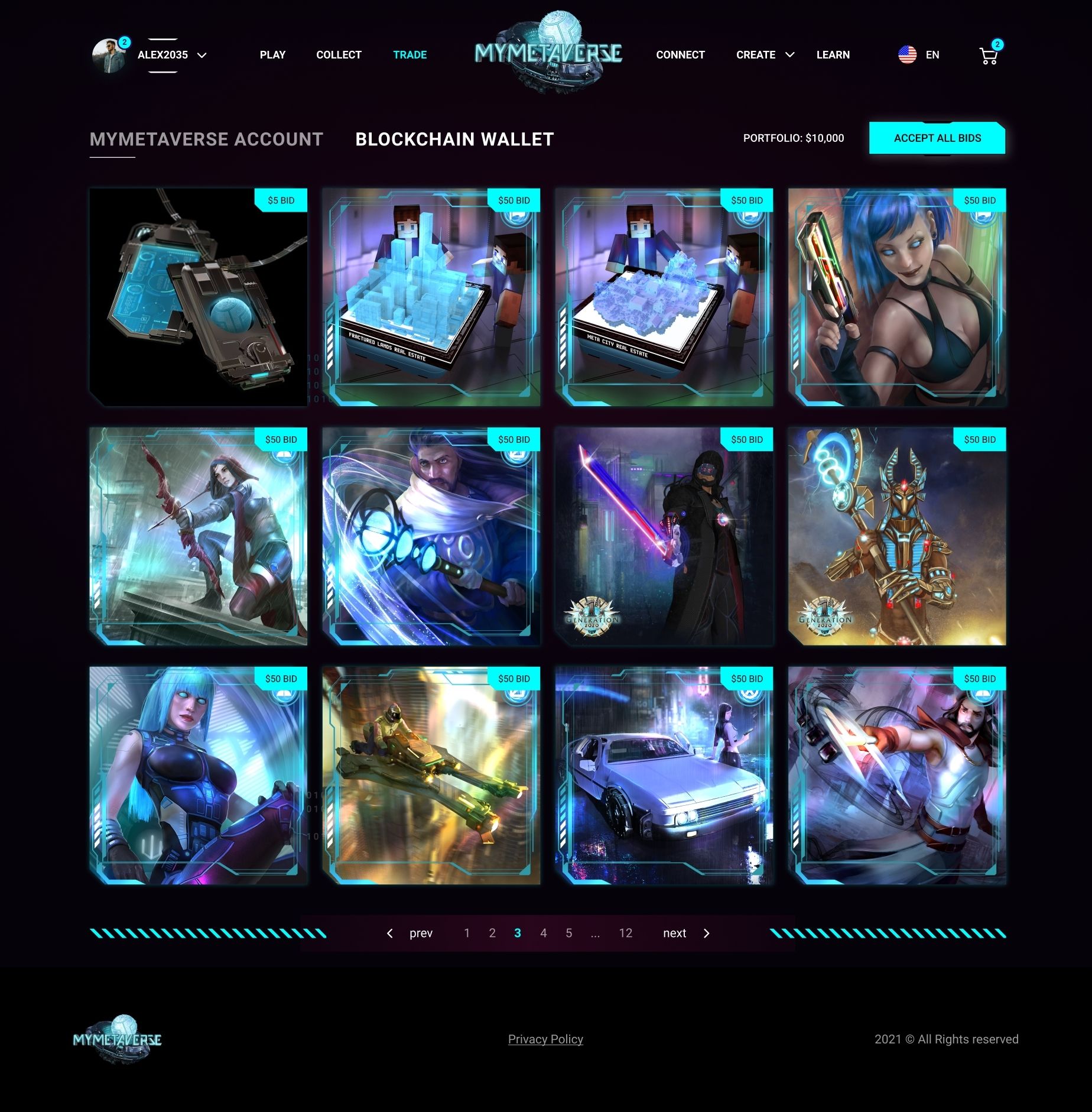 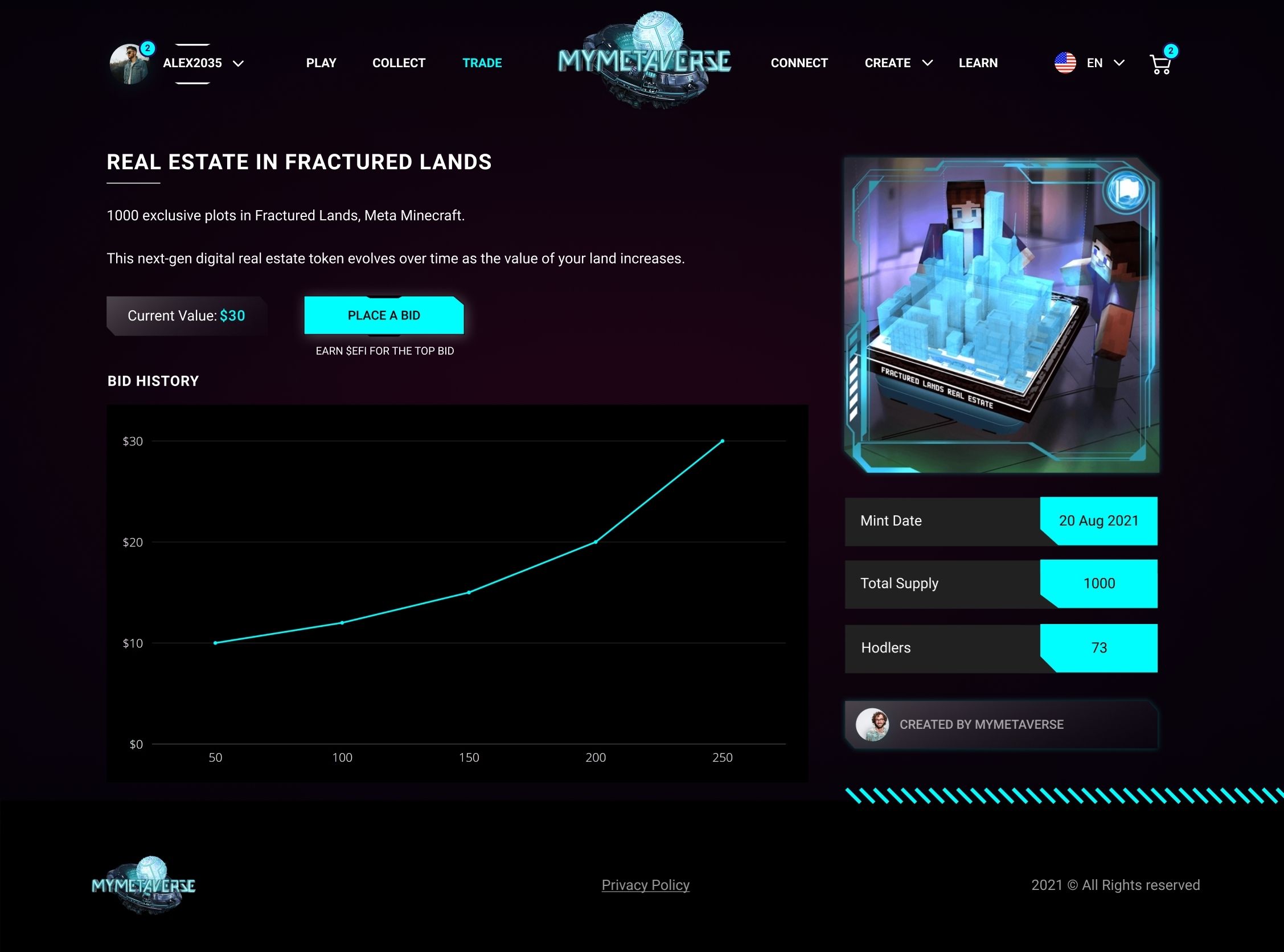 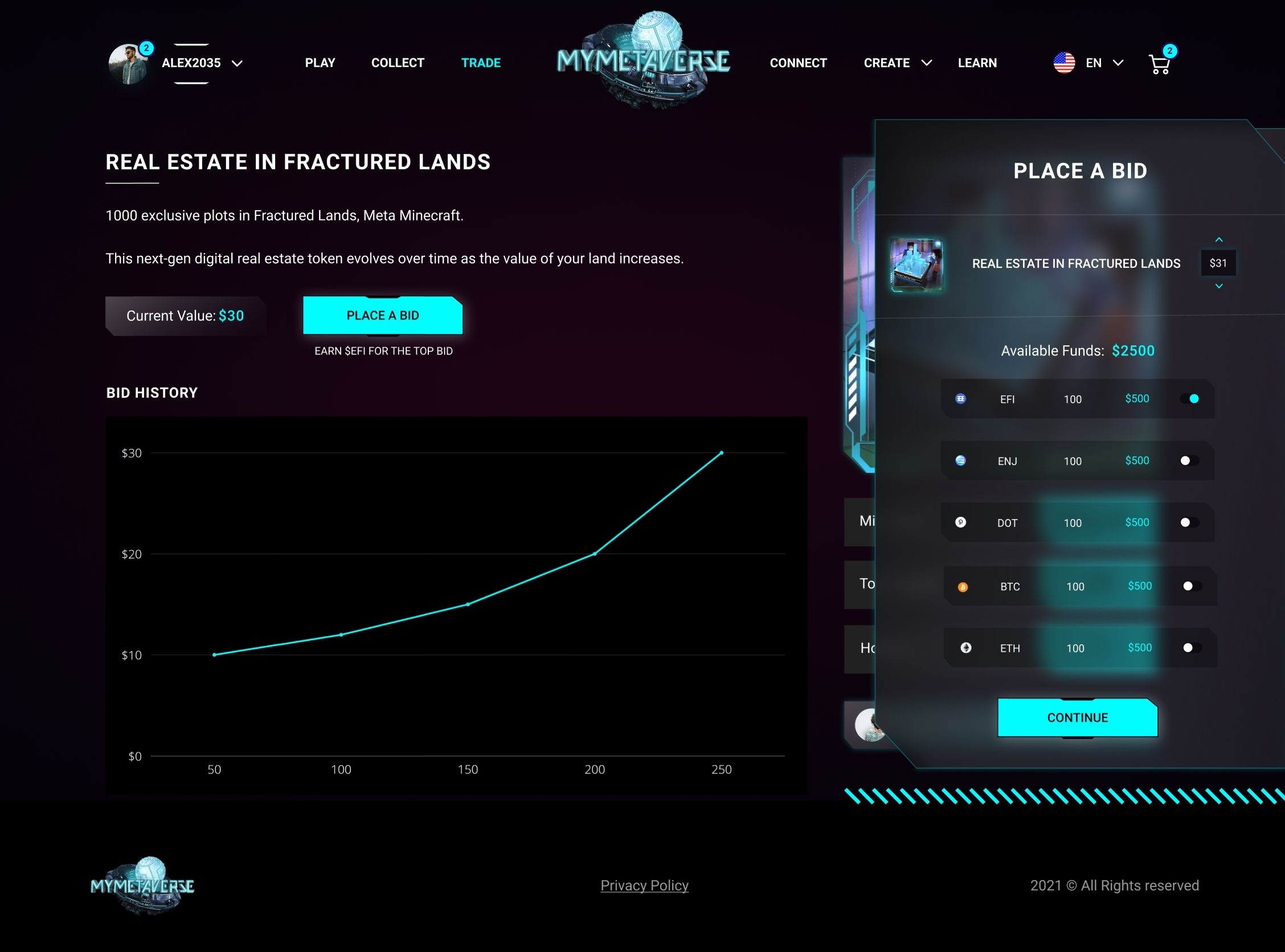 We think we’ll be able to achieve all of this with a simple API that gives us access to Efinity’s on-chain marketplace and the Efinity Swap currency converter, along with Enjin’s existing API.

As a result, more adopters will flock to the ecosystem, bringing their users with them, and that's how you create a snowball effect.

How MyMetaverse Will Support Efinity and Polkadot

We are building a sprawling metaverse that brings Axie-style play-to-earn mechanics to a 3D MMORPG game.

In this story, society has crumbled around you and you must escape to the metaverse to survive.

This digital theme park has everything you need to keep happy, build friendships, and learn how to function in the “real” world – when you’re ready to return.

Every NFT that is integrated into MyMeta is backed by Enjin Coin, and we endeavor to keep adding new utility to all of our NFTs to ensure they will never get melted, which means the $ENJ used for minting our NFTs should be removed from the market forever.

All NFTs that you have purchased from MyMetaverse thus far -- and all of the NFTs we sell in the future -- will be usable in this new Metaverse MMORPG.

We also believe we’re going to be able to integrate the Efinity marketplace and Efinity Swap directly into the game client. This means players will be able to trade on-chain, purchasing NFTs from eachother without ever leaving our virtual world.

We will also create an $EFI, $ENJ, and $DOT education center in our game that will help people understand the power of these tokens, through interactive gameplay.

MyMeta is currently being built by a team of nine developers and designers. 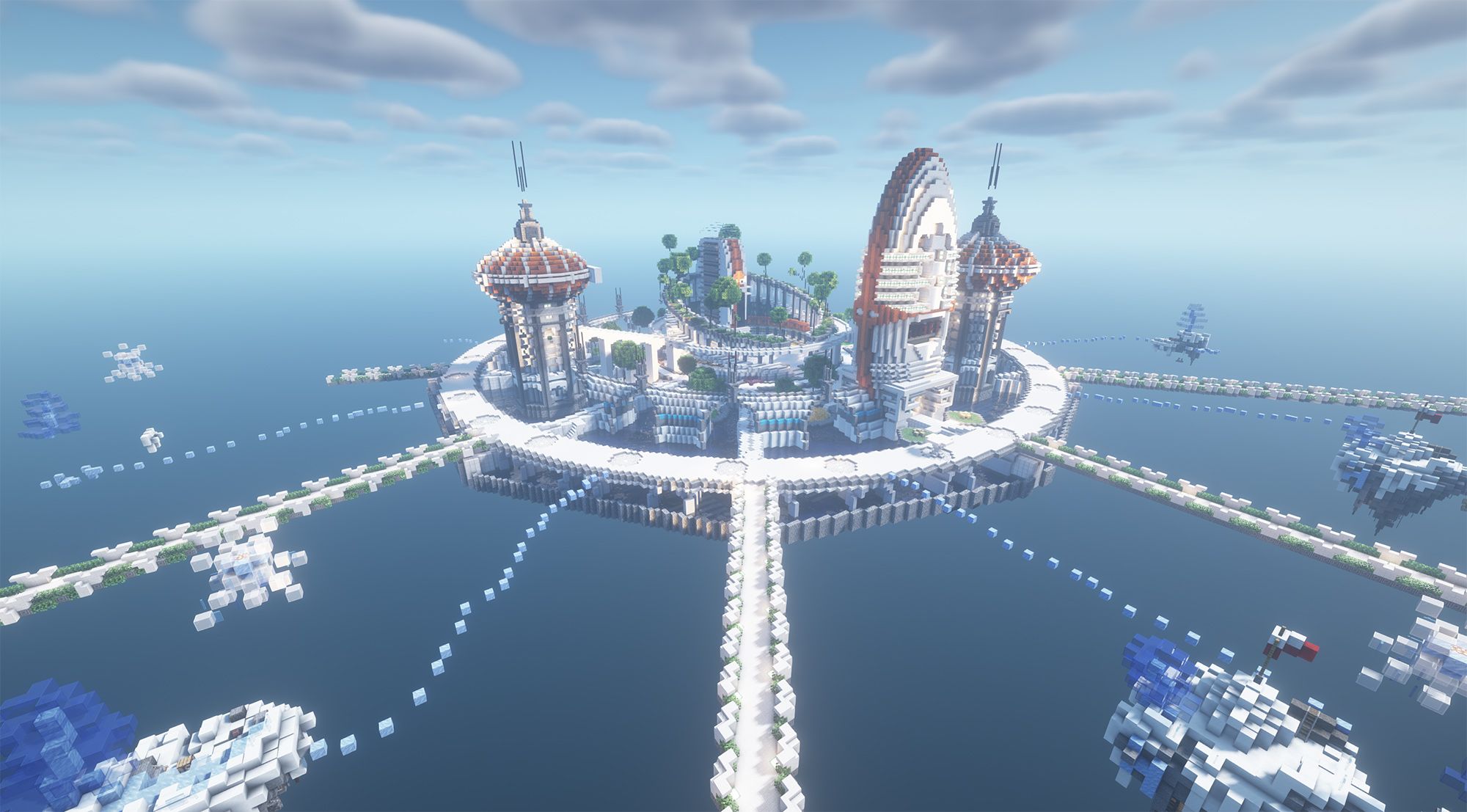 Our Minecraft server is already live and in open beta.

We have integrated NFT weapons, armor, shields, companions, mounts, real estate, and identities into the game.

All of these NFTs are backed by Enjin Coin and we can’t wait for them to flow freely onto the Efinity network.

We believe Minecraft could be a great way to educate people about NFTs, $EFI, $ENJ, and $DOT.

However, there are still bugs to iron out and we’re working on building a sustainable gameplay loop, which is why we haven’t started advertising yet.

Also, the server infrastructure for Minecraft is very inefficient – it takes 10x the RAM to host each player on Minecraft, in comparison to our custom-built Metaverse MMORPG, MyMeta.

These are challenges that we are constantly working on because we know this server could be amazing if we put enough time and effort into it.

Once we are confident in the experiences we’re providing, then we will start marketing.

Meta Minecraft is currently being built by a team of 5 developers and designers. 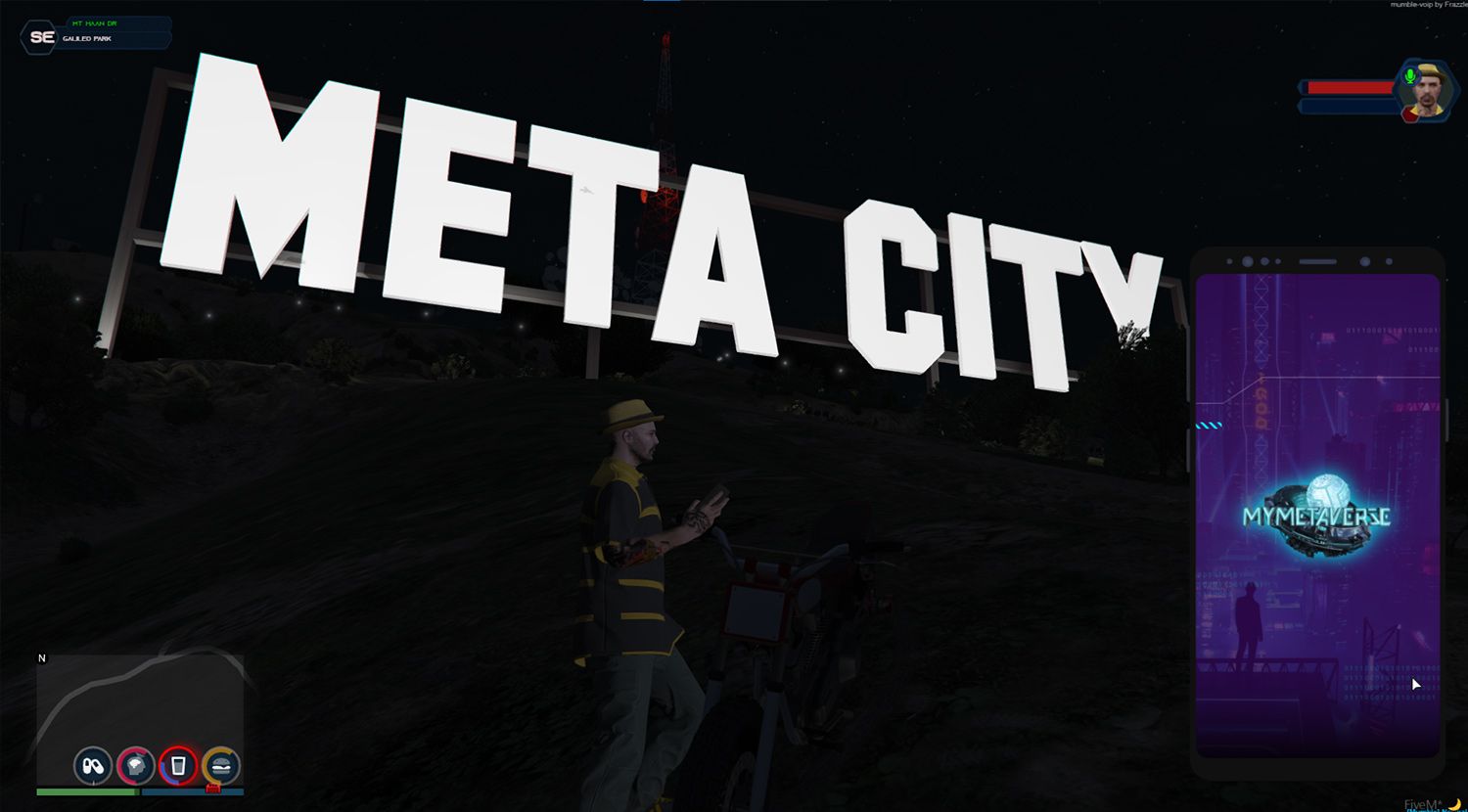 Our GTAV RP (roleplay) server is already playable, but we haven’t opened it up to the public.

We even have our MetaCitizen identity NFTs integrated into the in-game mobile phone. 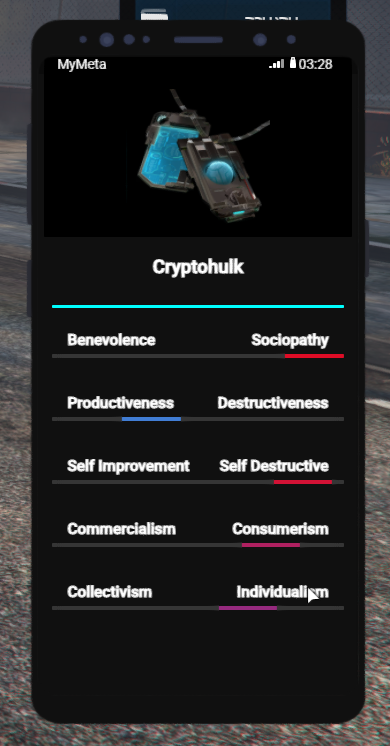 It’s so satisfying to watch your sociopathy levels skyrocket unavoidably, despite trying to do the right thing in the chaotic city of San Andreas.

However, the server infrastructure for Grand Theft Auto V is even more inefficient than Minecraft and we are worried that if we open it up to the public, it won't remain stable.

We’re not in a position that we can pull developers off one of our other projects to work on this, so we don’t plan on opening the server up until we have dedicated developers working on GTA full time.

Once we can fully support it, we strongly believe that GTA RP content will be an excellent way to educate people about the Efinity and Polkadot ecosystems.

Meta GTA is not being actively developed at this time. 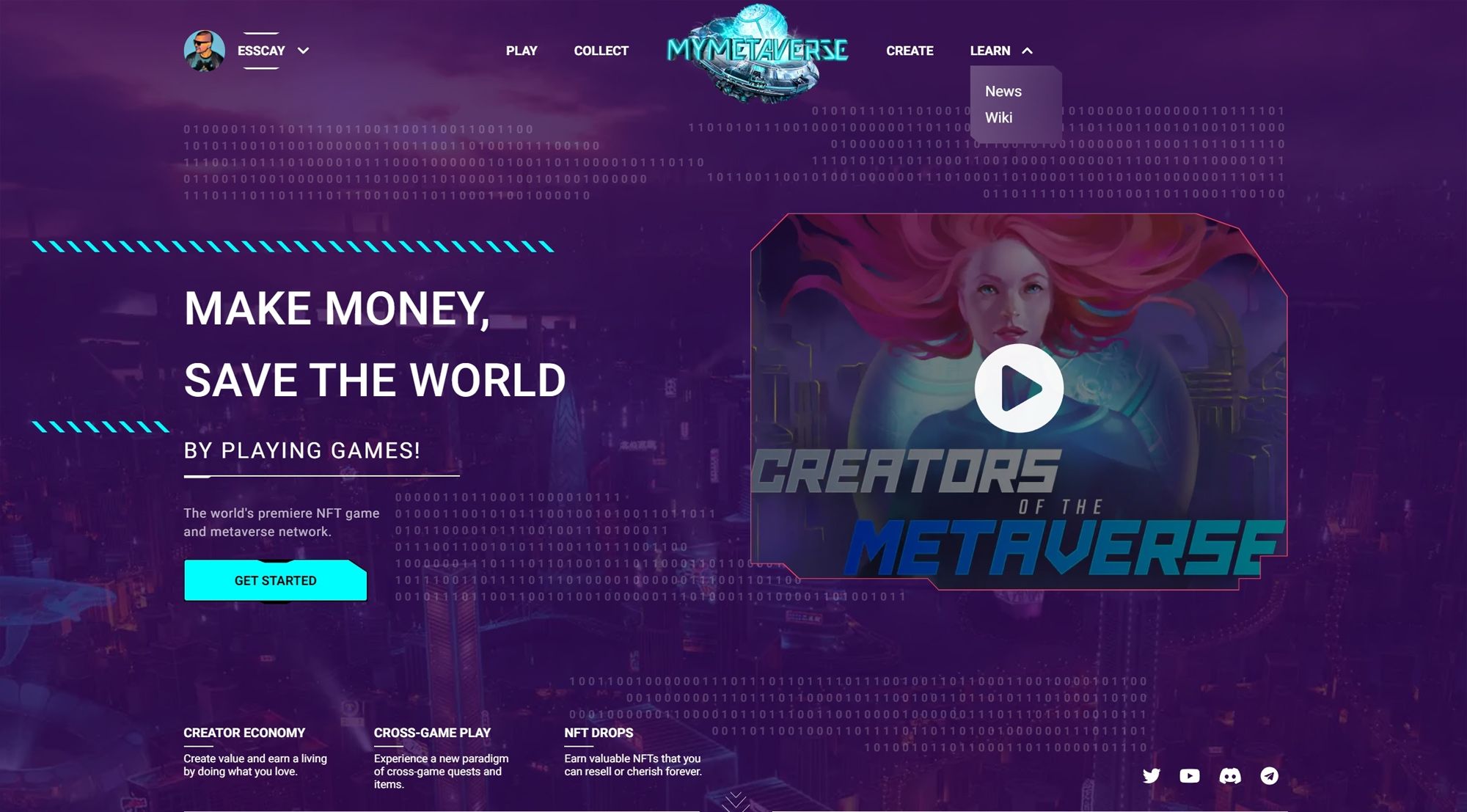 Everything we do, all of the games we create are built on top of MyMetaverse’s NFT tech stack.

Our dream is to build the world's first Metaverse Explorer, that can be integrated into thousands of games – and become the ultimate tool for directly facilitating Efinity and Polkadot adoption.

Every time a user withdraws an NFT from their MyMetaverse account they will be able to send their NFTs to the Efinity blockchain – automatically moving them from whatever blockchain they currently reside on.

MyMetaverse’s website, API, and back-end infrastructure are being worked on by 6 designers and developers.

Efinity is an open ecosystem where we can submit proposals and EFI holders can vote on whether or not to fund them.

Efinity has the right kind of governance model to enable a wild surge of innovation and evolution. Once we finish building out our platform, games, and services we are keen to move our focus towards deep web3 development.

It’s our belief that the Efinity parachain and the Polkadot Network are the most important new development in the NFT space right now, and we plan to go above and beyond to support their growth and adoption.