By Robert Baggs
15/10/2021
Steam Will Come Crawling Back to the NFT Community, We Shouldn't Let them

Rumors have circulated for a while that the titanic game platform, Steam, has had a change of heart on games utilizing blockchain in any way, NFTs or otherwise. There has been a small but growing pool of more graphically intensive blockchain games within Steam’s library and many upcoming projects have hung their hat on their acceptance by Steam. Now, Steam has rowed back, stopping projects in development from being accepted, and even informed current blockchain games already playable on Steam, that they will be removed.

Steam Holds Age of Rust Back From the Age of Enlightenment 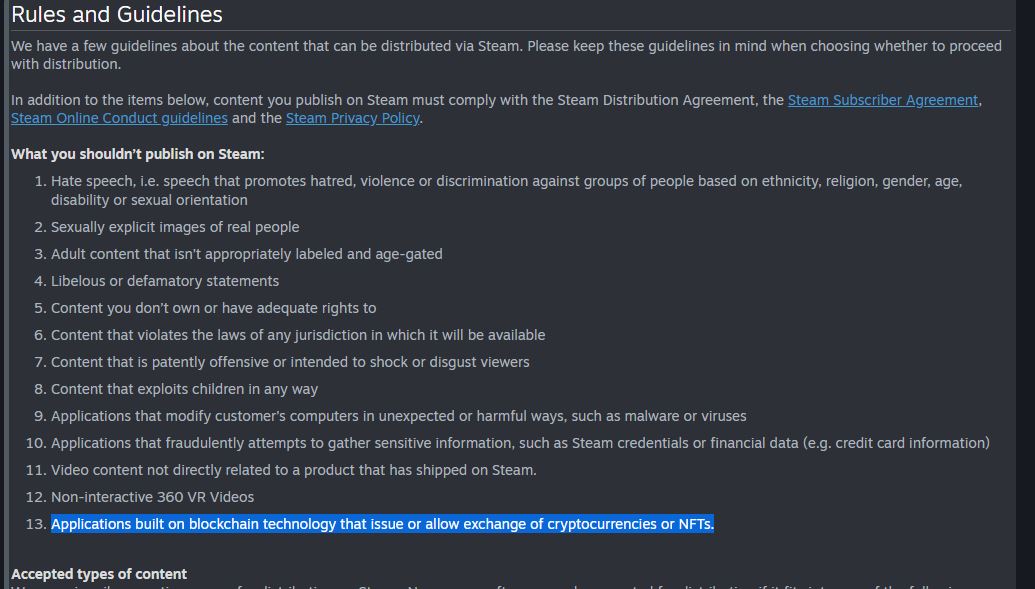 The full Age of Rust Twitter announcement can be read here.

Chris LoVerme, CEO of Age of Rust, has confirmed that Steam has made contact to inform them that all blockchain games will be removed from the platform. Stipulation 13 of the above Rules and Guidelines adds new criteria for games unwelcome on Steam: “Applications built on blockchain technology that issue or allow exchange of cryptocurrencies or NFTs.” It does suggest that blockchain technology isn’t banned in and of itself, but as NFTs are the cornerstone of blockchain gaming, it may as well have just prohibited blockchain entirely.

LoVerme is understandably bewildered by Steam’s decision during such a fruitful NFT climate, calling it a “draconian stance on what has shown to be a huge potential for growth for indie games and a future platform for AAA games, when they get there.”

It’s a disappointing move that could well prove costly for Steam in years to come, with developers suffering at Steam’s hands unlikely to forget. LoVerme believes Valve is building a “walled garden” around its own interests.

The Age of Rust team were told that Steam does not allow items on its platform that have real-world value. This is said while also maintaining their own “Community Market” where you can buy and sell items for myriad games for fiat currency. It’s difficult to see this justification as anything other than Steam not wanting to relinquish control of the trading. LoVerme also believes that this platform-wide ban is to “protect the marketplace they’ve invested in centrally” and ensuring that players cannot trade without Steam getting “some kind of fee from sales directly”.

LoVerme also highlights something many of us have wondered: Is Steam going to launch its own blockchain project? With gaming’s inevitable pivot to blockchain, it’s difficult to imagine Steam choosing to lose its grip on so much of the industry. Instead, this may be a foundational move to protect future interests. LoVerme suggests they may be “trying to get an early control by banning games now to have an onboarding later.”

It doesn’t seem unlikely to me that Steam will launch its own NFT marketplace in the coming years as the successor to its Community Market, and have it act as a hub for trading gaming NFTs; a hub they both control and enjoy kickbacks from. Why own the cow when you can own the farm?

The knee-jerk reaction of many to this ban is that this is horrendous for blockchain gaming and I can understand that response, but it’s not necessarily all doom and gloom. In fact, this sudden darkness only serves to accentuate the light.

The Great Dichotomy: The Steam for Blockchain Games

This news needn’t be a setback for blockchain gaming at all. Steam has had something close to a monopoly on gaming platforms, particularly for indie games. Blockchain gaming and the metaverse is presently almost entirely an indie venture, which makes their decision all the more baffling.

Nevertheless, there will need to be some equivalent for blockchain games and there is an obvious candidate: the metaverse. The metaverse will be explored by traversing varying digital worlds by different developers and so the metaverse — MyMetaverse — becomes the place to explore and the modern equivalent of a game library.

The blockchain gaming community has largely reacted in a way that’s easy to understand: “why doesn’t Steam want us?” But, the question we ought to ask is, “do we want Steam?” Do we want the home of the metaverse, the future of gaming, to be intrinsically linked and controlled by a centralized behemoth with seemingly archaic philosophies? We mustn’t forget this betrayal of indie developers as the inclusion of blockchain and NFTs transitions to the norm in gaming.

This is a time of innovation and change, where a future many of us did not imagine possible can be realized, and realized soon. We are protective of our shimmering new future from the greedy hands, dripping with our data, but then look to other large organizations for approval and legitimization. Blockchain gaming is already a towering beast growing in both size and strength with every passing second and the metaverse is forming around it.

We ought to be dismissive of those who want to control the metaverse after proving themselves wholly unsuitable of our trust. We ought to cut ties with those who themselves are tethered to antiquated systems and thinking. Those who strive to hold back the metaverse must not be given the chance to have a hand in its construction. Instead, they should be left to regret their reticence to assist in building the future of gaming and rue their reluctance to adopt its pioneers.