It occurred to me as I read Enjin’s latest partnership announcement, just how easily it could be overlooked by naysayers. If you thought NFTs were just a flash in the pan fad during a tumultuous period for our planet, you wouldn’t be short of “evidence”. While NFTs started as digital art — albeit laced with popular collections that would make your Grandma furrow her brow with confusion, “you paid how much for that weird cat doodle?!” — it has quickly become ubiquitous with crypto. Suddenly, everyone from Audi to the US Space Force is involved in the NFT movement in some way, cashing in on a burgeoning trend, you might say. And this is where, in a moment of empathetic clarity, I saw through the eyes of what is most likely to be the masses. Every industry is jumping on the brightly-colored, eye-wateringly lucrative bandwagon. Every new entrant into the space might be met with a scoff and a tut; bloody marketing! I know I have thought this myself about all sorts of trends. TikTok was once a Vine-esque social media platform populated with dancing teens and that young woman who zooms in on her face while lip-syncing. Now every marketing department of every major brand, person, or company, is either on the platform, or shoving their reluctant and disgruntled superiors towards it. So, how is that any different from the rushing masses harnessing the buzz around NFTs? In every way imaginable.

On June 9th, 2021, Enjin announced their partnership with Health Hero, a digital health engagement company. Health Hero describes themselves as “Modern health engagement” aiding hospitals, employers, and health systems, well-being, social determinants of health. Health Hero is doing admirable and important work — make no mistake about it — but in the context of blockchain and gaming, it’s hardly relevant, is it? Yes, it is, and not only that, it’s a damned important and frankly brilliant move. So, what are the fruits of this partnership?

GO! BY HEALTH HERO: WHERE GAMING, FITNESS, AND NFTS CONVERGE 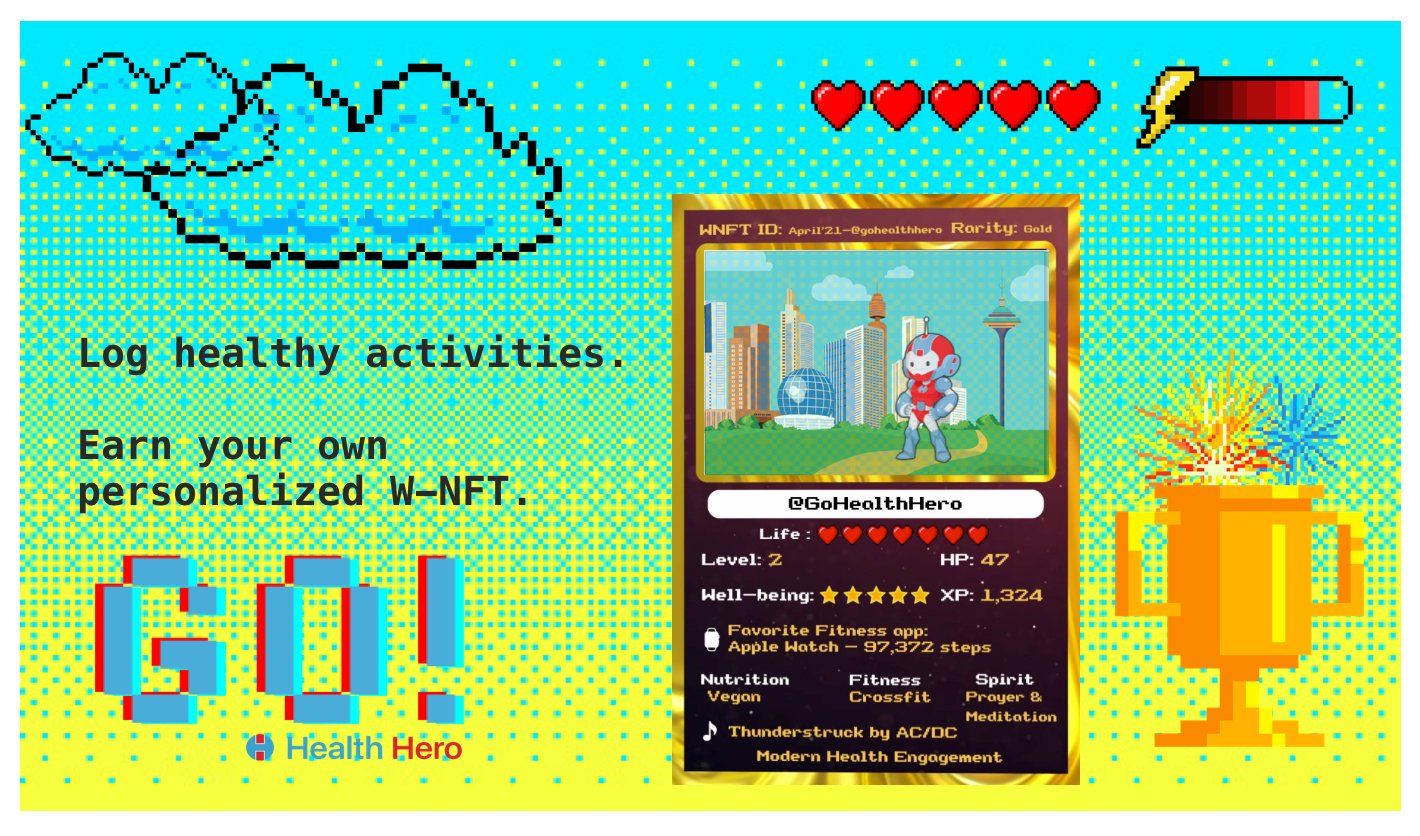 The above picture will fill in a lot of the blanks before my words do. Go! by Health Hero is a health monitoring and engagement NFT that aggregates and displays data like a fully-functioning mobile app. One that you never even have to download because it lives inside your crypto wallet. Your Enjin wallet is evolving to become a new form of super app, that can host an unlimited number of NFT-Apps inside it. In Health Hero’s case, The NFT collects your activity through your Fitbit, Apple Health, Google Fit, and various other, similar trackers. From the data, the Go! NFT generates unique metadata, introducing scarcity into this new kind of token. There is another standout NFT that is designed to function the same way — MetaCitizen. Each NFT will aggregate data from multiple games to allow players to create a distinctly unique cross-game profile. This shows how NFTs can completely replace the need to develop, launch, and maintain standalone applications while providing NFT collectors with the ability to release themselves of apps that function as centralized walled gardens, with more of their daily needs met through their secure and immutable NFT wallet.

I believe I have a fairly well-tuned eye for technology and whether it will succeed, however, Health Hero is performing a form of NFT integration that I didn’t see catching on: fitness trackers. While I found the idea interesting and the data useful, I couldn’t see it escaping fitness enthusiasts and chalked it up as niche. Now, my mother-in-law can’t go a single day without racking up her 10,000 steps, and there’s an undeniable competitive streak as the connected app shares her stats with her friends, who are all charging up and down their local streets too. It’s one of those uses of technology that is difficult to fault. The idea conjured between Enjin and Health Hero to combine that metric-driven fitness market, the power of NFTs and their collectibility, and the undeniable allure of gaming, borders on the genius. The thought that I can level up my NFT character by working out, gathering rare traits, and being able to share and trade these victories is exciting. This plays beautifully into what we at MyMetaverse are so confident is the next wave for NFTs: utility and application. And in all honestly, it’s a use case that hadn’t even occurred to me. We are inching into our first steps of exploration into the functionality of NFTs — where their true value resides — and I can’t help but wonder just how many brilliant applications are about to be discovered. If you’ll forgive the false dichotomy, I feel that anybody who doesn’t think the future of NFTs is a little intoxicating, probably doesn’t understand them well enough.

There is one more feather to this NFT-App innovation that is in a foetal stage, unmentioned but present in this release: wearable NFTs. The concept of wearable NFTs has been floating around the subject since NFTs soared from meme to famed auctioneers, but for me, it lacked what is now lurking. Wearable NFTs could work insofar as fashion (though I’m unconvinced that’s likely, at least for now), but it is utility that could solidify the concept. Having your Enjin-based Go! NFT character on your wrist, comparing traits and stats with friends as you level it up is a logical step from simply looking at an app, and arguably more rewarding too. Character customization and development is central to so many genres of games, but it could also be the key to wearable NFTs.

Health Hero is already an established force in this space, used by over 38,000 companies, and partnering with the likes of Microsoft and Slack; mark up another important factor in the impending global recognition of NFTs as more than just pictures. Enjin’s JumpNet facilitates a green, environmentally friendly solution for NFT-Apps to take the fitness and wellness sector by storm, without the drawbacks of gas fees and staggering electricity consumption, thankfully sidestepping the most common backlash over the rise of crypto. This combination of forces to then introduce gaming into the mix is a move that could spark adoption, interest, and innovation in a whole host of connected areas, further legitimizing what we at MyMetaverse confidently chant to ourselves like a mantra: NFTs will touch everything on earth and despite what the art sales on OpenSea might suggest, they are criminally undervalued.

Error: [31m The Parser function of type "checklist" is not defined. Define your custom parser functions as: [34mhttps://github.com/pavittarx/editorjs-html#extend-for-custom-blocks [0m
Loading